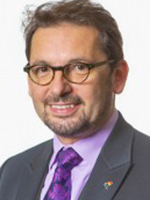 Dr. Milev completed his medical degree in Sofia, Bulgaria in 1983, obtained Specialty of Psychiatry in Bulgaria, MRCPsych in England and FRCPC in Canada and defended PhD in Forensic Psychiatry. In 1995 he moved to Regina, Canada where he became Medical Director of the Mental Health Clinic. In 2001 he was appointed Clinical Director of the Mood Disorder Research and Treatment Service in Kingston. From 2007 until 2017 he was the Head of Department of Psychiatry at Queen’s University and affiliated teaching hospitals. In 2017 he became the Director of Centre for Neuroscience studies at Queen’s University and in 2018 he was appointed as Vice President, Medical and Academic Affairs at Providence Care Hospital. He is a Fellow of the Royal College of Psychiatrists (UK) and a Distinguished Fellow of both Canadian and American Psychiatric Associations.

Dr. Milev is actively involved in research in Depression, Bipolar Disorder, and other mental disorders. Main areas of his research include stigma, sleep architecture, psychopharmacological and neurostimulation treatments. The most recent focus of his research has been biomarkers for treatment response in depression, as part of the CAN–BIND integrated discovery program.

Dr. Milev has over 100 peer reviewed publications and book chapters. He has lead many symposia, workshops and panel discussions at conferences and has presented numerous lectures to psychiatrists, primary care providers and other health professionals. Dr. Milev is involved actively in undergraduate, graduate and postgraduate teaching, including supervision of Masters and PhD students. He has co-authored several CANMAT guidelines for management of patients with Major Depressive Disorder and Bipolar Disorders. He has won several prizes and awards.

What I do when I'm not working

Somewhat of a guilty pleasure for me is that I am an inexhaustible street photographer. I love to stroll the streets of cities I travel to for work and pleasure seeking interesting subjects and objects to snap a quick photo. Even better is when Lili joins me.