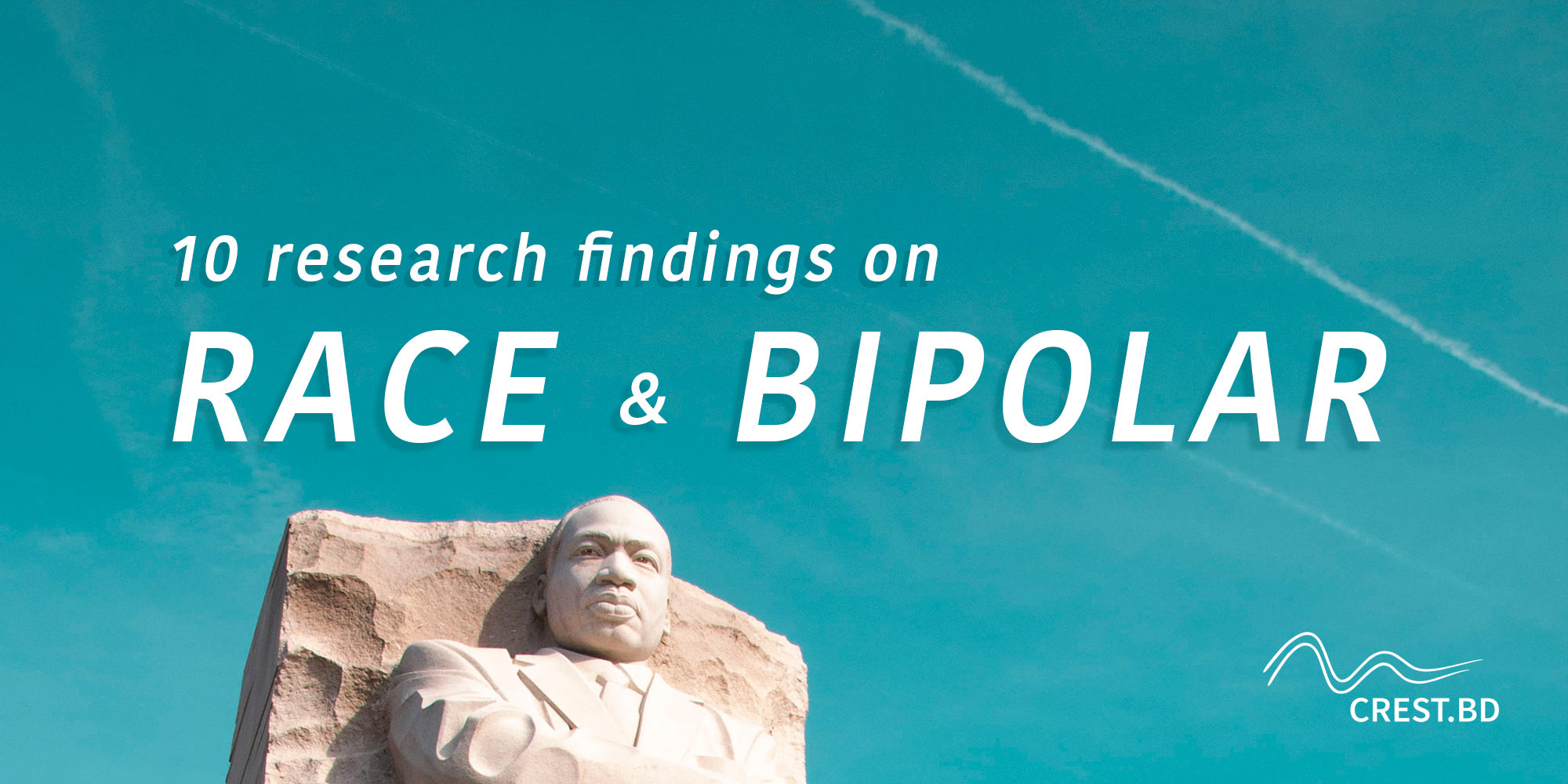 How do race and ethnicity affect outcomes and treatments for people with bipolar disorder? It’s clear that BIPOC (Black, Indigenous and People of Color) communities do not necessarily experience this mood disorder in the same way as non people of colour. In this special #BipolarBlog to support ongoing dialogue on racial justice, we’ve compiled 10 research observations relating to race, ethnicity and bipolar disorder.

A caveat from the outset – it’s encouraging to see that research is occurring internationally to advance knowledge on how bipolar disorder is experienced by diverse people. However, this field of research is immature. More support and funding is needed to build a platform of high quality evidence about how people of different races, ethnicities and identities experience both bipolar disorder, and the social, societal and structural systems they are navigating through that are marred by systemic racism and health and healthcare inequities.

Black people with bipolar disorder are more likely to be misdiagnosed with other mental health conditions (i.e. schizophrenia) than people of other races.

Substantial racial inequality in bipolar disorder treatment occurs. This small study found that no Black survey respondents had received adequate mood-stabilizing treatment, and Blacks were less likely than whites to have taken a mood stabilizer in the prior year.

3. Asians are less likely to receive a diagnosis of bipolar disorder

Diagnosis rates of bipolar disorder in Asians in a US study was less than 3 times that of Blacks, and less than 5 times that of whites. The authors conclude that persistent racial/ethnic differences in the diagnosis and treatment of mood disorders and schizophrenia occur, but call for further research into underlying causes and further examination of whether processes and outcomes of care are equitable across diverse patient populations.

4. There is higher reported prevalence of Bipolar I in Asians and Latinos

Asians and Latinos are more commonly treated for bipolar disorder type 1 than whites. This may be related to under‐diagnosis, misdiagnosis, or care underutilization of people with milder presentations of bipolar disorder. (e.g., type II) .

Lifetime prevalence of mental health service utilization among Asians with bipolar disorder is less than 2-3 times that of other ethnicities.

Understandings and experiences of bipolar disorder are under-researched in Indigenous communities. This is also true of many other mental health conditions, including anxiety disorders, eating disorders, and schizophrenia. Mental health research in Indigenous peoples in Canada overemphasizes suicide and problematic substance use; a more critical application of the concepts of colonialism and historical trauma is called for.

9. There is greater community mental health support in some black communities

Underpinnings of therapy often originate from Western concepts. This can create a barrier to accessing counselling for people from non-Western cultures, including Indigenous Canadians. Integrating Indigenous cultural values, like community and cultural identity, into counselling practices could help meet the mental health needs of First Nations people.

This list is only a starting point for highlighting some of the available research findings on race, ethnicity and bipolar disorder. Are there other studies you’d like to see included in this list? We’d love to hear from you. And we welcome any and all feedback on the content and language we’ve used in this blog, please contact Dr. Erin Michalak, CREST.BD Director (erin.michalak@ubc.ca) with feedback, ideas or concerns.

More high quality, well-funded research is needed to comprehensively understand how bipolar disorder symptoms, diagnoses, treatments, access to care and institutionalization are experienced by diverse people with bipolar disorder. Clearly, systemic and systematic forms of racism wield enormous power over these experiences. Driving forward research agendas in this space is only one part of the picture. Concrete actions are required to redress the current reality: that Black people, Indigenous peoples, and people of colours’ experiences of bipolar disorder are often much harder than they should be.

This article was inspired by #ScholarStrikeCanada, an initiative for scholars to pause their academic activities in protest of ongoing racial injustice in North America. Through September 9th and 10th 2020, the Scholar Strike is hosting digital teach-ins about racial justice, which will be available later on their YouTube channel as well. You can view the schedule here.