Mental Health and Movies: Recommendations on What to Watch While Self-Isolating 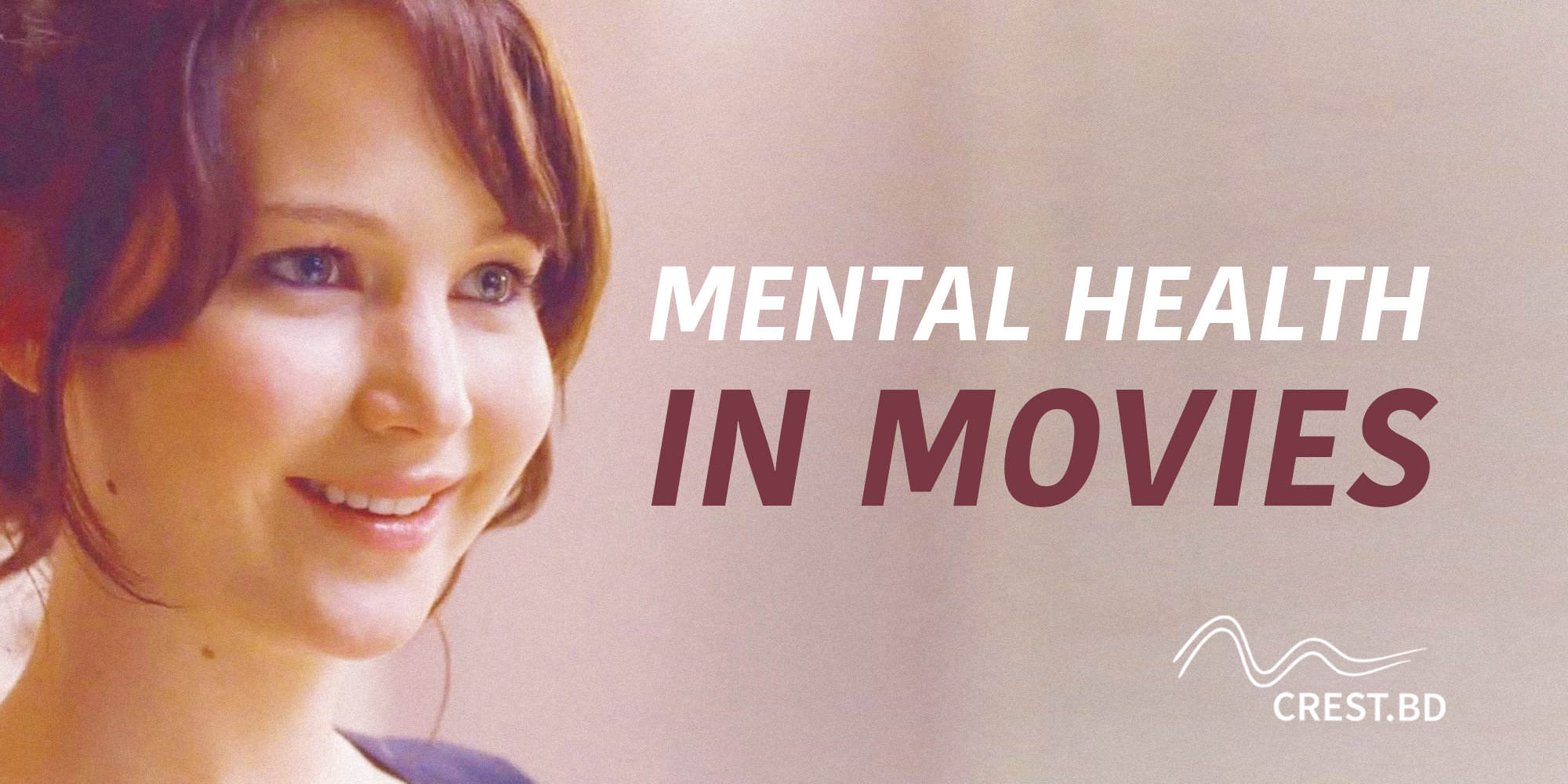 As many of us are confined to our homes during this safeguard to shield ourselves, our loved ones, and our neighbors from contracting COVID-19, we’ve been turning to our computers and television screens even more than usual. I certainly am guilty of that! With such an abundance of content to choose from it can feel overwhelming to narrow our choices. As a volunteer with CREST.BD and a self-proclaimed cinefile (I know it might not be very cool to refer to oneself as such – how many movies do you have to see to be a cinefile anyways?) I thought I’d compose a list of some of my favourite films featuring mental health.

Small caveat: The film industry tends to take creative license with manipulating and exaggerating the truth of people’s lives or the conditions they’re experiencing. If movies aren’t engaging and entertaining, they’re unlikely to amass large audiences. And with that is a missed opportunity for fostering knowledge and compassion towards people living with mental illness. The problem though, is that unless viewers are going home and doing solid research on the accuracy of these illnesses, this “movie education” can represent a form of mainstream education. Unfortunately, certain misconceptions can get repeated throughout many films and even in cases where the filmmakers are clearly trying to make heartfelt and intelligent work. It’s important to recognize this form of learning is often geared towards giving us an emotional understanding of a life outside of our own in order to gain empathy. Movies, especially fiction, will never be a replacement for real life experiences, and we need to try our best to understand when liberties with storytelling are taken. 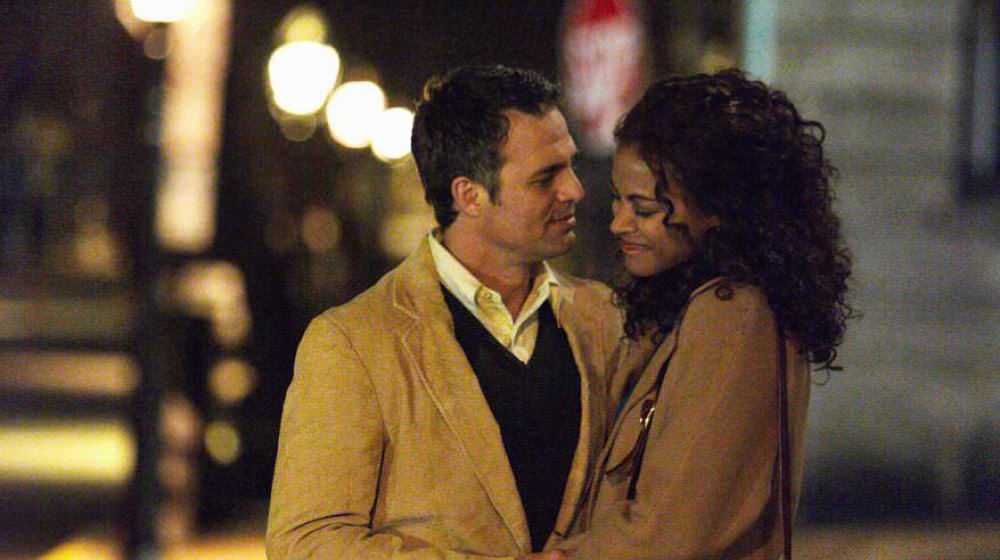 This film details the life of a father (Mark Ruffalo) and the challenges he and his family face in the context of his bipolar disorder. The film takes place in the early 70’s beginning with the protagonist meeting his wife (Zoe Saldana). She is somewhat aware of his struggles and previous hospitalization, but it’s not thought of as a big deal as “everyone was having mental breakdowns back then.” As their relationship continues and after the birth of their two daughters, they begin to realize that this was in fact not a one-time deal but a lifelong journey. This movie shows us how mental health conditions can have different impacts on different family members, but also the importance of connection, love and support. 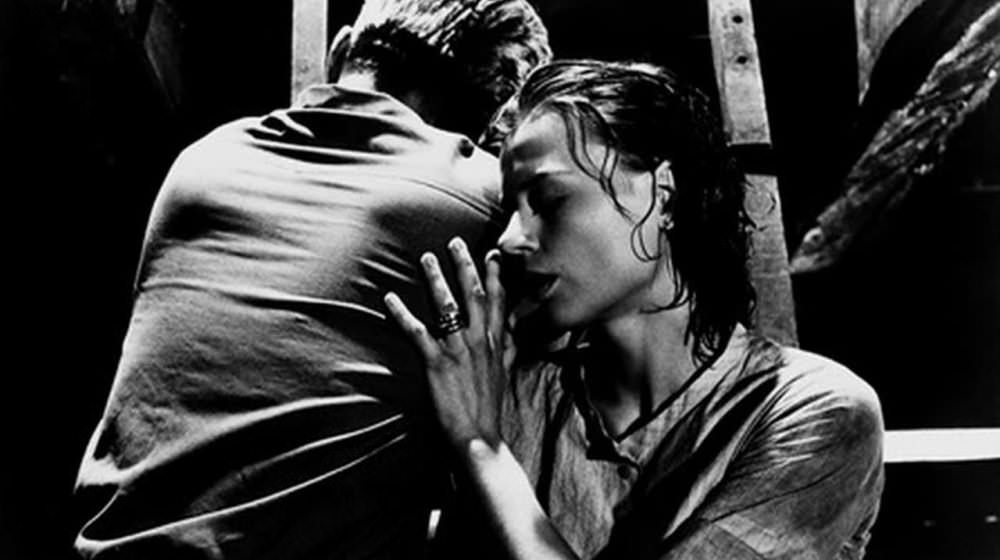 If you’re looking for something classic but provocative, this film, written and directed by Ingmar Bergman, achieves success in its ability to delve into uncomfortable subject matter. This film has been critiqued as a family drama and follows the lives of four people: Karin, a young female who experiences schizophrenia, and her father, younger brother and husband. Taking place over a 24-hour period on a remote island, the films shows the arduous ways family members deal with each other during difficult circumstances (Karin is becoming acutely psychotic).

Variety staff described Through a Glass Darkly as “Not a pleasant film, it is a great one.” The New York Times, called the film “tightly constructed and starkly realistic.” 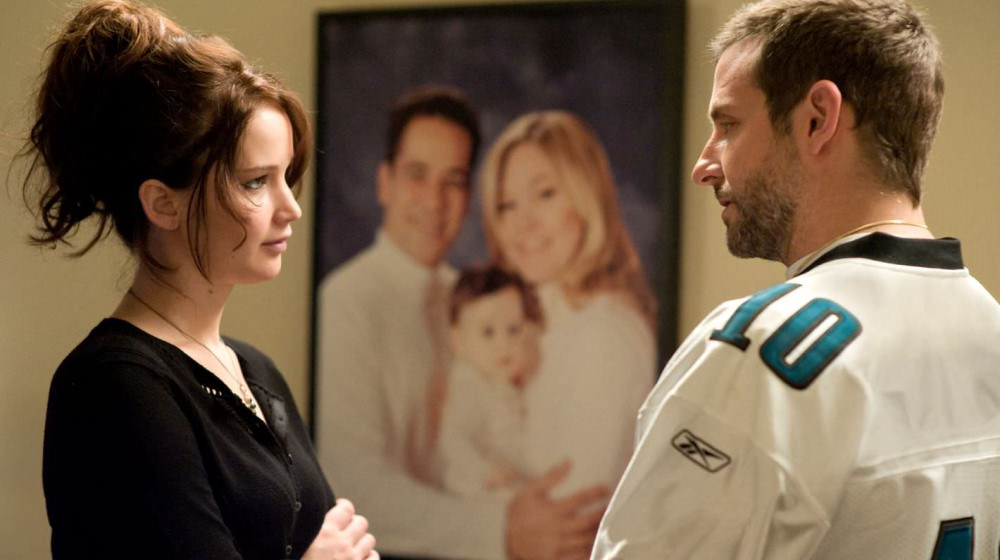 SLP is in one sense a cliché love story and in another sense the complete opposite. Hollywood elites Bradley Cooper and Jennifer Lawrence take on the roles of Pat and Tiffany, two individuals navigating their own mental health who are able to come together and lean on each other for support. This film begins with Pat’s exit from time spent in a psychiatric hospital and shows how dynamic recovery can be. Pat’s therapy is traditional (medication and therapy) but also, shows us the importance of human connection, physical exercise (dance in this case), support from friends and family and a feeling of accomplishment. Perhaps the movie is at fault for making it seem all so easy (just be beautiful and find a beautiful girl and all your mental health problems will disappear!). But I think if we can go beyond that very simplistic reading, this film can teach us a lot about hope and overcoming even when life seems as its most bleak.

These last two are documentaries, which I wanted to keep separate, as they are similar to narrative films in some ways, but function very differently. The documentary can be a window into the lives of people, groups, or industries to which we may not otherwise have access. Documentaries weave stories like those of fictional dramas. They do so not with scripts but rather with footage of real people and real-life events. Sure, the majority are biased with regards to the point of view they want to convey, and often use only a fraction of the footage taken to create their stories, but they can still offer a lens on the complexity of real lives. They hold the potential to “engage audiences at an emotional level and diminish perceptions of “otherness” (Conrad et al., 2014).

Diverse mental health-related documentaries exist and have been made for various purposes such as educating audiences on a particular illness or condition, and demystifying individuals or groups which at points in time may have been shunned or ostracized. They are also used to advocate on behalf of those with mental health issues as well as to call attention to possible problematic public attitudes or areas in need of improvement in institutional settings. It is not an easy task to portray mental health. It is, however, of utmost importance to value and carefully consider the dignity of the lives of the people portrayed in documentaries. 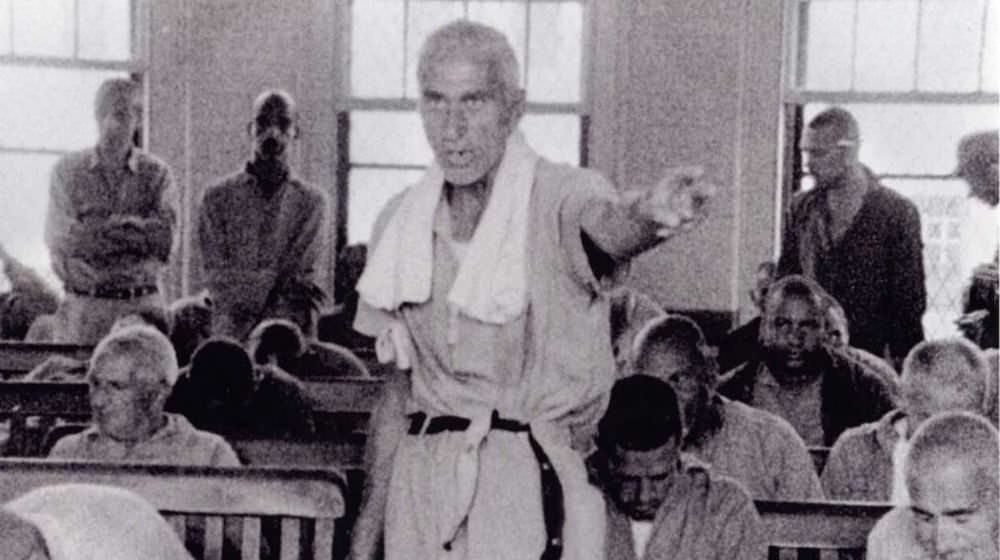 Certainly controversial, Titticut Follies was one of the earliest documentaries to take on the topic was of mental health and institutionalization. The film was completed in 1967 by renowned documentarian Fredrick Wiseman and was initially shown at several prominent film festivals (even winning “film best illustrating the human condition” in Florence) before it was quickly banned. The Bridgewater Institution, where the film was shot, claimed Wiseman “invalidated the privacy of unconsenting and incompetent inmates.” However, Wiseman would contest those claims, saying they were made solely because the faculty at Bridgewater institution desired to save themselves from public scrutiny, since the film clearly shows “inmates” being neglected and abused.

Years later, in 1987, Wiseman launched a case for the release of his film and the courts found no reason to have the film remain outlawed. In 1991, Titticut Follies was finally released to the general public. The film takes the viewer inside Bridgewater State Hospital for the “criminally insane.” Wiseman and his camera crew are there only to see the events as they happen with minimal intervention. The viewer is witness to 90 minutes of unspeakable tragedy as they watch human beings living with mental illness be abused by guards and treated with little dignity or respect. Before Wiseman began this project, he was a law professor who had access to this institution. The horrors he observed motivated him to advocate on behalf of the patients and to spark public dialogue.

I believe he began this project with the best of intentions, and that, by allowing these human rights violations to become public, his work may have opened doors for improved treatment and care. This film is, however, deeply controversial with respect to issues of ethics and consent. Wiseman contends that consent was given to him by all he filmed via an oral agreement, insufficient by today’s standards. A trigger warning for the film is needed – its content at times is deeply disturbing. On more than one occasion, it’s unclear if the patients are aware that they are being filmed and to what purpose. It’s a prime example of a documentary where we are unsure if the ends justify the means. 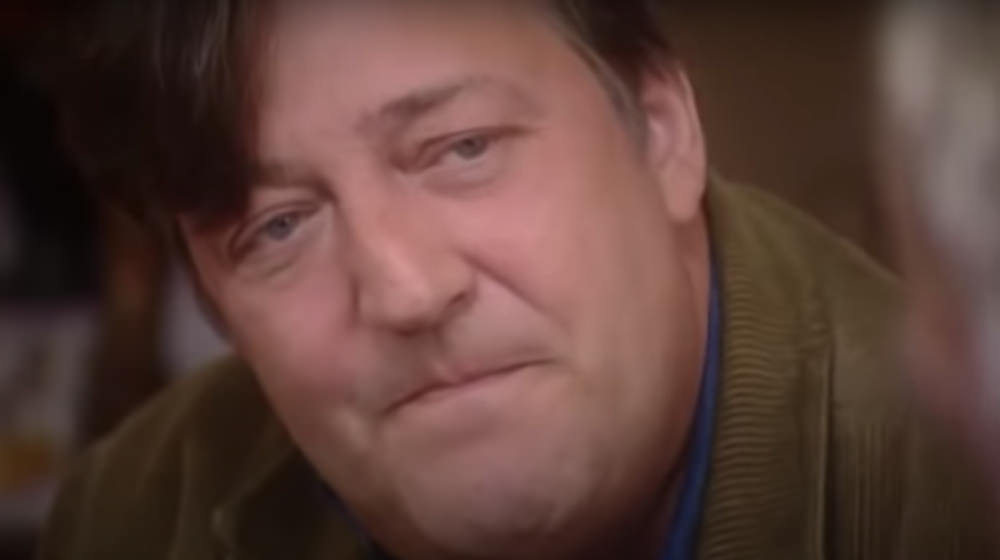 Stephen Fry: The Secret Life of the Manic Depressive (2006)

A documentary as entertaining as it is compassionate, informative and thought provoking. Rooted in his own experience with bipolar disorder, Fry explores this topic through his personal understanding, interviews with other people living with bipolar disorder, and their family’s as well as discussions with medical professionals.

Fry, born in England in 1957, is a renowned actor, comedian, and writer. He had a booming career in England and amassed success and praise by contemporaries and critics alike, but behind the scenes was a struggle with his mood that at times led him to be the life of the party all the way down to being incapable of leaving his house for weeks at a time. Fry describes to us his own struggle, expulsions from college, and substance use. He also extends past his own experience to allow us the opportunity to understand how although many people with bipolar disorder do have similar qualities, they can manifest quite uniquely, and everyone has their own personal struggle and means of coping. He interviews famous celebrities such as Robbie Williams, Carrie Fischer, and Richard Dreyfuss, as well as non celebrities – people flourishing, and people struggling.

Overall, what impresses me most is the depth and breadth in which he explores the topic. He explains the condition’s potential biological roots, and discusses the complexity of treatment options and why some choose to use medications and others not. He talks about stigma and why it is so difficult for people to reach out for help and he does all of this with such a lack of judgement. The many people introduced to us in this film have a myriad of ways in which they cope, and they are explored openly.

The COVID-19 pandemic has been difficult for all of us. As we wrap up 2020, we look ahead to a new year where we can finally turn the corner on the pandemic. But while we’re still snuggled up at home in these last days of the year, a movie night might be in order!

One Comment on “Mental Health and Movies: Recommendations on What to Watch While Self-Isolating”