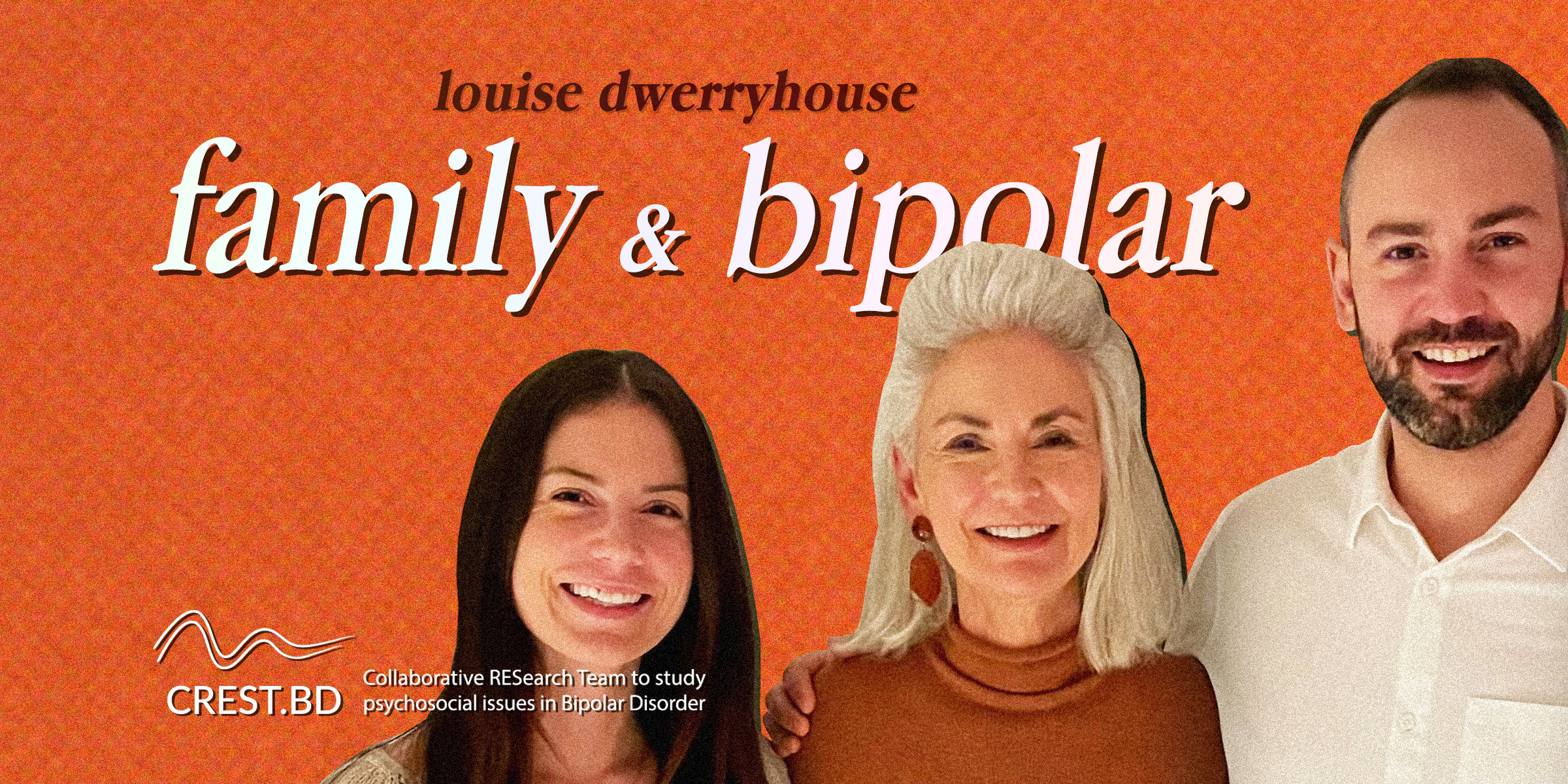 “I’m a great believer in luck,
And I find the harder I work,
The more I have of it.”
—Thomas Jefferson

Having worked as a social worker in child protection for many years, I came to understand that a child’s seemingly quick departure from the home is often not the result of one dramatic episode, but rather a slow deterioration of parental ability to cope and nurture over time. In my career I apprehended and took many children into custody. Yet at one point in my life, I found myself in a comparable situation, where I failed to care adequately for my own. The irony of this has not been lost on me.

“Depression doesn’t ambush overnight, like soldiers in the Trojan Horse. Rather, it launches a slow stealth attack, stealing the ability to function bit by bit, sorrow by sorrow.”

I was an actress delivering an Academy Award performance as a successful and highly-functioning career woman with a just about perfect life—even if the veneer was tissue paper thin.

Here is my story.

My son John had been living with me only a short while after my divorce when it became very evident that he missed his father and the benefits of his predictability. It was remarkable and unnerving how John could sense the onset of a switch in my moods, often before I was even aware of it. The slightest hint of effervescence due to an elevated state had him frightened like a horse who has just heard the first thunderclap of an approaching storm.

Good parenting requires love, consistency, stability and discipline. Yet, during times of sickness, all I could offer was love. Sadly, love wasn’t enough to produce well-rounded, secure and happy individuals.

John became increasingly angry, discontented and resentful having to live with me. He started running with the wrong crowd at school: boys who were quick at picking fights and seemingly always in detention.

His anxiety fed off my own abundant anxiety, eventually becoming so pronounced he developed facial tics. As a social worker, these changes in conduct were a prescient warning of more behavioural problems to come. I had to do something. It was obvious John had to go live with his father and new wife, 600 miles away–even though it would pain me to miss the day-to-day activities of his future teenage years, like seeing him go on a date for the first time.

“When I asked if he wanted to go live with his dad, he immediately said yes. It was what he’d been waiting to hear.”

I felt I had to make the same offer to my younger child Kiki, even though she seemed unaffected by my minor mood swings. She seemed happy living under the very same conditions John found wanting.

Without taking more than a few seconds to consider, she said she wanted to continue living with me. So, I bought a two-bedroom condo for us both. I painstakingly stencilled hundreds of purple stars all over her bedroom walls to make the space feel like a room of her own.

Unfortunately for both of us, I developed hypomania due to the stress upon hearing my father was dying, with only months to live. Although not high enough to be hospitalized, I was, in retrospect, too excitable, self-absorbed and easily distracted to be a sensible parent. Kiki successfully breezed through that episode. But, after the high period, I experienced a deep depression which radically changed our circumstances. I really should have been hospitalized at that point, but I didn’t appreciate the gravity of my situation.

I was making hot dogs and microwavable foodstuff for dinner because I couldn’t cope with cooking. Even though Kiki never went hungry, I wouldn’t describe the meals as being good or very nutritious. The kitchen floor was perpetually sticky, the kitty litter was only changed when it made my nostrils burn, and we learned to smell the milk before we drank it because it was often past its best-before-date. Kiki’s clothes always looked like she had slept in them–I didn’t have the strength to iron. Eventually I found a product to make creases go away so Kiki wouldn’t be ridiculed at school.

I wasn’t really holding it together. I was still managing to work at my stressful, demanding and difficult job, made worse by a packed caseload where I witnessed huge suffering on a day-to-day basis. I’d get home exhausted and close to tears from holding it all together, so I had to nap an hour each day before dinner. Kiki was on her own while I slept but never complained. She watched TV or did homework.

She was only eleven.

My self-management strategies and sacrosanct routines were the first to go in the face of advancing depression, leaving me without the necessary tools to counterattack this major onslaught. I was foundering.

I’d sleep all day Saturday and Sunday until the depression had lifted slightly, only venturing out of bed at 5:00 p.m. Kiki wanted me to chauffeur her around. I always did get out of bed to drive her, but used to wonder what she thought of a mother who stays in bed all day?

I was trying, but it wasn’t good enough. I only wanted to hibernate until the day arrived when my pain had become a thing of the past.

After seven months of my ineffective parenting, I received a curt email from my ex-husband stating Kiki wanted to go live with him permanently, an hour’s plane ride away. She had never said a word to me. Not one peep. Nor had she complained. I couldn’t blame her after what I just described.

I’d hurt her. I never meant to be so horrible to my Kiki.

I hadn’t taken John’s departure to heart because he’d exhibited his sorrow over a long period of time. I’d wanted to relieve him of his suffering as any mother would. It was me who suggested he leave. But my Kiki? That little girl with so much mental toughness who had hidden her suffering from me so successfully and completely for so long? Her desire to leave hit me with such force it made me implode.

Once Kiki left, I had to take four weeks’ stress leave from work. Now, I found I couldn’t even make hot dogs. I quickly descended further into depression. I became self-destructive overnight, subsisting solely on Danish pastries, coffee, 50 cigarettes a day, and for the first time ever, booze, which I turned to for comfort. Since I was not at work, I drank excessively by myself, often starting mid-afternoon.

I finally realized I needed help, so I went to see my psychiatrist, who gave me a hug when he saw my crumpled state and the magnitude of my distress and suffering. He told me he didn’t think I was as ill as I believed, but thought I was suffering from extreme grief.

“I felt Kiki had died. No one seemed to understand but him.”

Kiki left home when she had traces of baby fat. I still wanted to serve her Cheerios for breakfast.

That’s what I wanted. I wanted to kiss her flawless skin, not yet etched by life’s tragedies, and tuck her in bed at night beneath all the purple stars.

Naturally I slid even deeper into depression. My psychiatrist felt he had to give me an antidepressant. A controversial course of action, because it can induce mania in someone suffering from bipolar 1 disorder, but I was trapped in a submerged car with an air pocket that was dwindling with each passing breath.

He did prescribe an antidepressant and I did get high. Very high. And I had to be hospitalized for two months. I was crazed by the pain of Kiki’s departure because I was responsible—and I knew it. I wasn’t going to get a second chance at becoming a better mother. The finality of it all was too unthinkable to fathom.

She was only eleven, my Kiki.

A quote by Jackie Kennedy haunted me while I was plagued by my children living elsewhere,

“If you bungle raising your children, I don’t think whatever else you do matters very much.”

The years following my children’s departure were grim and hard to endure, filled with self-loathing, great shame and regret. It was a mixed-up lonely existence. But life is unfixed and ever changing. I never could have predicted four years after John and Kiki’s departure, circumstances in my ex-husband’s life would change, and my services as a mother would be required.

It was a miracle.

It’s often said that luck is a matter of preparation meeting opportunity. I’d been ready and waiting patiently in the pole position following extensive therapy, successful pharmaceutical intervention and sobriety.

I’d bungled their upbringing and here was my opportunity to put things right.

When my children came back into my life they were in their mid-teens and still needed a parent who was able to provide guidance, consistency and stability. I got another shot at motherhood before they left home for good, and ultimately, I became a responsible parent because I was finally well.

“I realized I’d never been a horrible person, but only a sick one. That epiphany of sorts enabled me to forgive myself–which I consider one of the cornerstones of recovery.”

I finally appreciated firsthand the huge cost of not having enough contacts or supports as a single mother, especially as someone living with bipolar disorder. My situation wouldn’t have become so precarious if only I’d reached out to a professional, friend or family member as soon as I began experiencing difficulties and not after it became a major crisis. As I descended further into depression, instead of intensifying my efforts at maintaining my well-established routines that kept me stable, I spurned the quartet of good mental health: sleeping a reasonable amount of time, exercising, eating healthily and honouring all my psychiatric appointments. It was a costly mistake which resulted in me paying the ultimate price.

For all those parents out there with bipolar disorder or other types of mental illnesses who’ve lost custody of their children or become estranged, and who have also lost all hope of a reunification, there can be a brighter day and happiness in your future once you’re stable. I see no nobler goal than becoming balanced for our children.

I’ve now been in recovery for years and lead a full life filled with laughter, peace and joyfulness–interspersed with moments of sadness, as with any other life. I did get to see John go on his first date after all. The work I undertook to bring about change after living without my children for a few years, unquestionably paid off.

My overall feeling today is one of immense gratitude, not the least for the “luck” I managed to experience along the way. 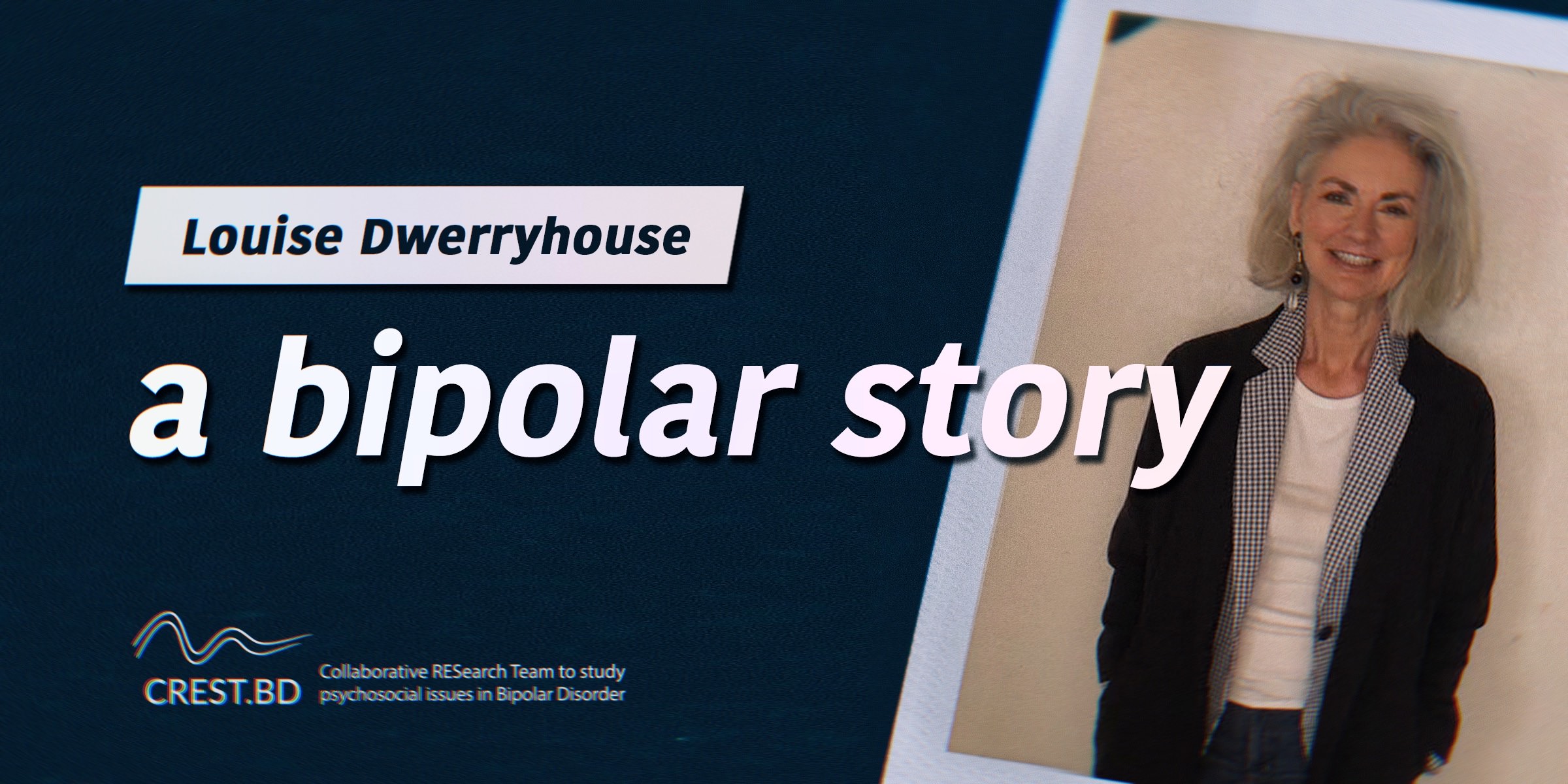 A Bipolar Story – Louise Dwerryhouse
Louise’s first blog post is an authentic, heartfelt reflection on what it means to learn to live well with bipolar disorder. 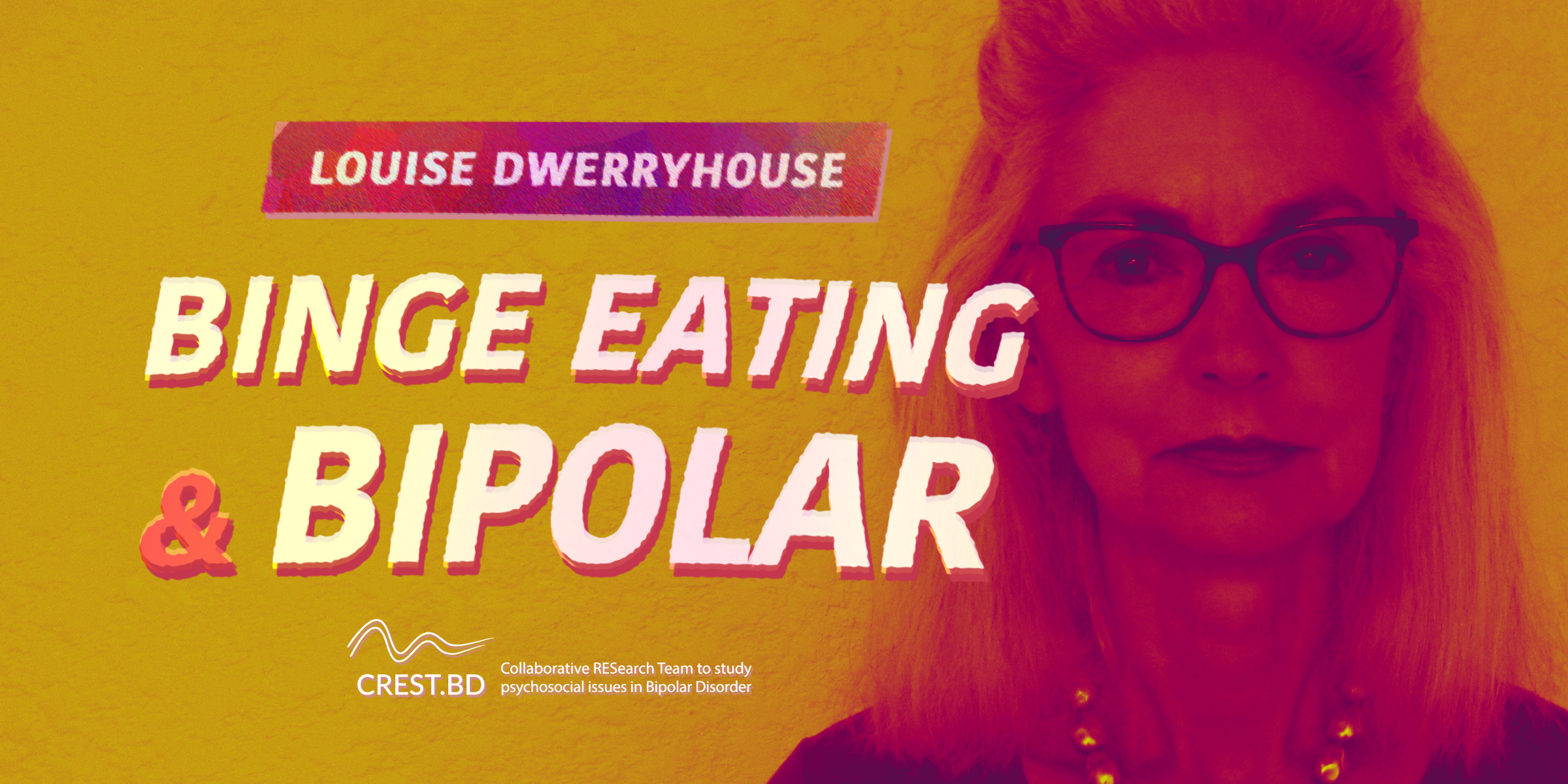 To Binge or Not To Binge
“Courage does not always roar. Sometimes courage is the quiet voice at the end of the day saying, ‘I will try again tomorrow’.” Mary Anne… 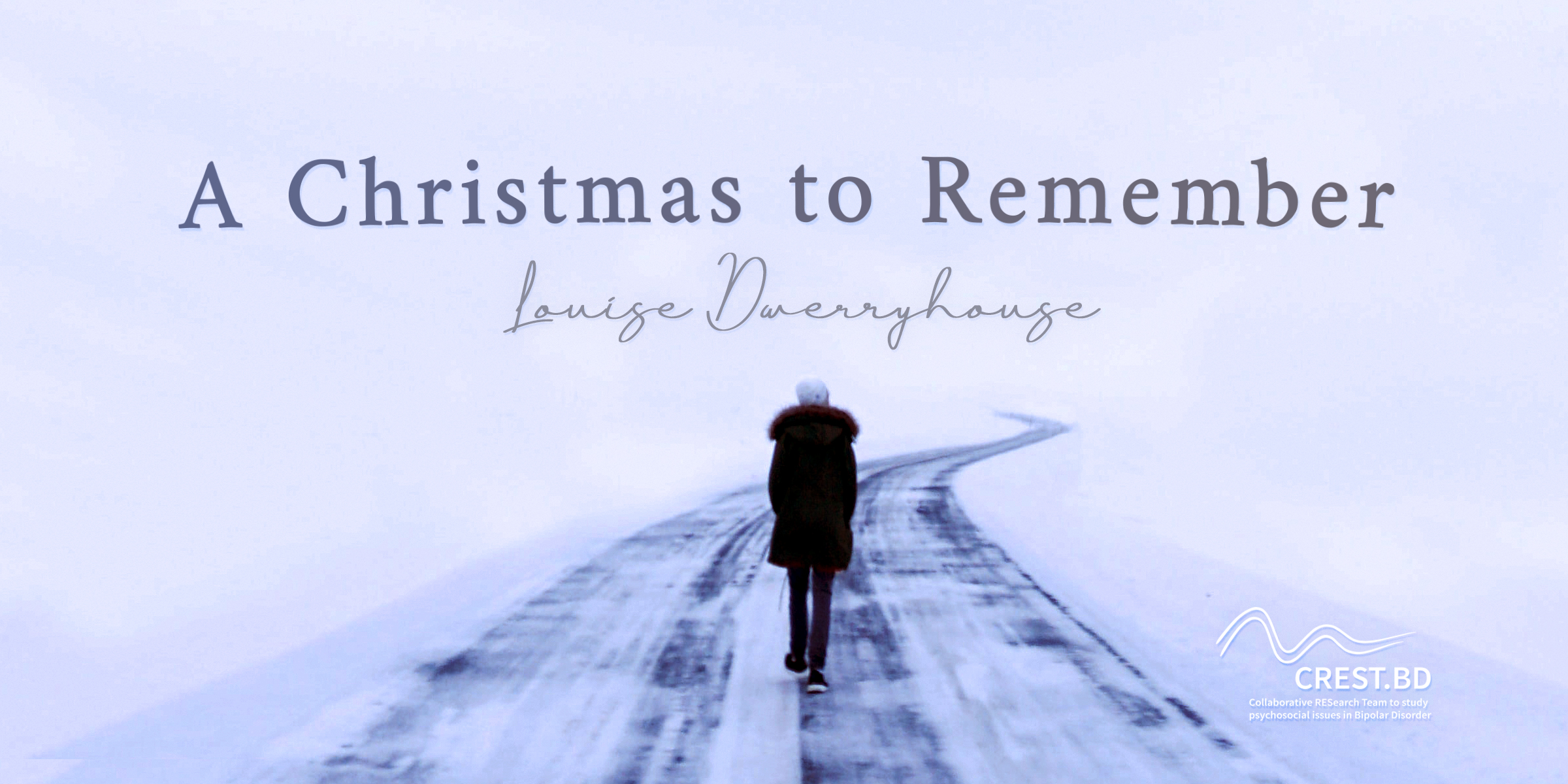 A Christmas to Remember: Hope for Bipolar in Unexpected Places
Recalling a Christmas from the past, Louise describes finding hope in the last place she would have expected.

5 Comments on “Hope and Redemption: Family and Bipolar Disorder”