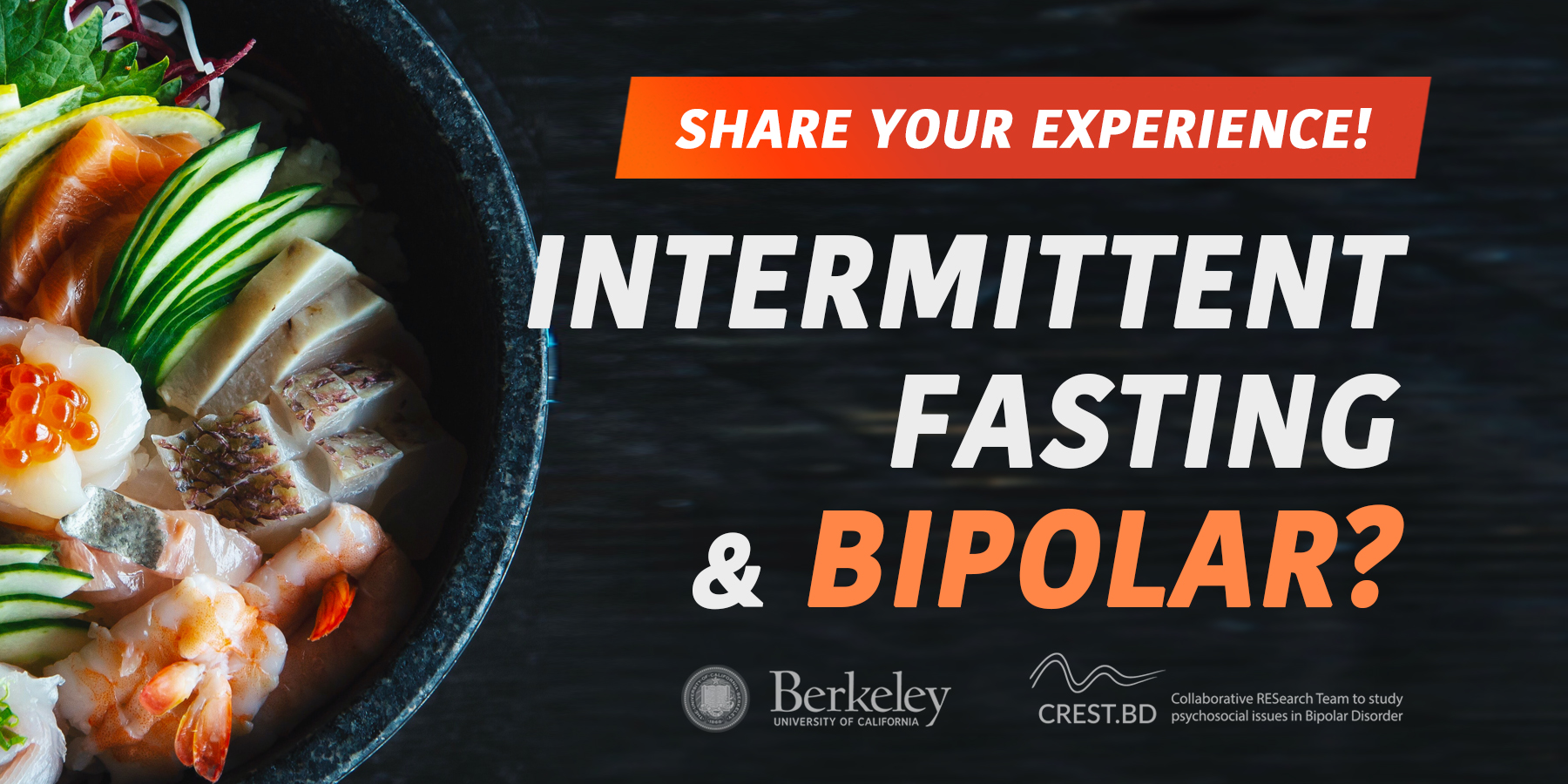 Have you tried intermittent fasting while living with bipolar disorder?

Intermittent fasting has become increasingly popular, and yet there is very little research in bipolar disorder. A research team led by Dr. Sheri L. Johnson (Professor of Psychology, University of California at Berkeley) would like to learn about your experiences with intermittent fasting.

What is intermittent fasting?

There are two forms of intermittent fasting that are common.

In the 5-2 diet, people eat their typical diet for 5 days, and then fast or eat only very small quantities for 2 days.

In the time-restricted diet, people limit their eating to 10 hours per day (for example, skipping breakfast). By limiting the number of hours of eating, there is a longer period of fasting, much of which happens at night. We are interested in this second approach – time-restricted diets.

Much of the work on these diets has been conducted in animals, or in people who do not struggle with their moods. Tell us about your experience in this 5-min survey:

Are time-restricted diets good or bad for bipolar disorder?

Across species, we have evolved to respond to the naturally occurring cycles of light and dark. Our sleep, energy, metabolism, and attention follow diurnal (24-hour) rhythms, as do those of all animals. These rhythms are internally regulated, but can be disrupted by many different environmental factors, including jet lag, shift work, and exposure to cellphones and other sources of blue light at night. Disruptions in circadian rhythms, in turn, relate to many different health problems.

Outside of bipolar disorder, animal research has shown that carefully timing meals, so that they occur only during periods of natural light, can strengthen and improve diurnal rhythms. This has led some researchers to test similar diets in humans– such that people are asked to eat their standard diet, but restrict their eating to day time (typically 10 hours of the day). As one example, sometimes people skip breakfast, and consume their first food around 10 in the morning, and avoid eating after 8 pm. In a different version, people eat their dinner early so that they are not eating after 6 pm. These types of “time-restricted diets” appear to have benefits for many different processes, including the strength of diurnal rhythms. In mice, this work has been shown to lead to improved metabolism.

No work has systematically tested whether intermittent fasting is helpful for those with bipolar disorder. We’re considering starting a study on the topic, and we are interested to learn from people who have tried this type of “time-restricted” diets, tried to eat only during daylight hours, or tried to limit hours during which they eat (e.g., only eat from 10 am to 8 pm, or only eat from 8 am to 6 pm).

We would love to hear from you if you have tried this to learn about good and bad experiences. If you are interested to hear more if we do a study, we would also like to know this. Tell us about your experience in this short survey here.

sljohnson@berkeley.edu
Dr. Johnson is a professor of psychology at the University of California Berkeley, where she directs the Calm Program. Her work has been funded by the National Alliance for Research on Schizophrenia and Depression, the National Institute of Mental Health, the National Science Foundation, and the National Cancer Institute. She has published over 200 manuscripts, including publications in leading journals such as the Journal of Abnormal Psychology and the American Journal of Psychiatry.