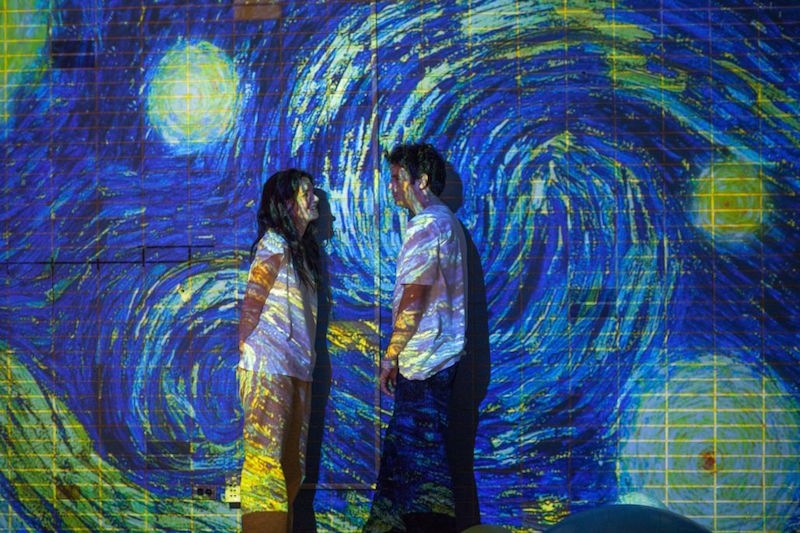 Touched With Fire is feature film I’d recommend that has recently been released on DVD. I’ll refer to an excellent article in BP Canada’s January 2016 edition that fully covers the development of this fictional story based on the director’s experience living with bipolar, learning about its dangers, the downsides, but also its positive aspects.

Like writer/director Paul Dalio, the male protagonist, played by Canadian actor Luke Kirby, is a bright young man with a passion for rap poetry slam, even with the same performing name as Dialo, “Luna”. The young woman, Katie Holmes, is a published poet and, as does happen, they meet on the psych ward and find they have much in common. The sun is her talisman. Between them they spin off into ungrounded territory as they spark and then fuel each other’s creative drives. Soon they both crash; their parents and hospital authorities are convinced they are not good for each other and try to separate them. At one point Van Gogh’s Starry Night inspires their version of a fabulous mural that covers the walls of their shared apartment. But it’s not a balanced or sustainable orbit they are on.

Like me and many others on the BD spectrum, they try to come to terms with the surges of creative drive that comes with this condition. And like many of us, Paul Dalio and his stand-in, Luna, found Kay Redfield Jamison’s ground-breaking investigation of this phenomenon a revelation. Her 1993 book Touched With Fire: Manic-Depressive Illness and the Artistic Temperament has an onscreen role as Luna introduces the work to his new-found soul mate. And now the film borrows the title (when it was first released it was titled MANIA DAYS).

Apparently when Paul Dalio was struggling with accepting meds, wondering whether he would lose the creative moxie that is so important to him, he asked to meet someone who was doing well on this stuff. Happily, his doctor introduced him to Jamison. What a gift!

He recreates that encounter with his champion (and mine) playing herself on screen in his film. Jamison is adamant (as she is in her work) that she is more able to be creative and productive when she uses medication. Dalio’s characters, like many of us, have decisions to make about how to integrate meds into their lives.

For many of us on the bipolar journey it is a struggle as there is not just a yes/no decision but much experimentation with different medications, trading off side effects. Sometimes it can take years to get it right. Jamison herself, who swears by lithium as her life saver, describes in her autobiography, An Unquiet Mind, being over medicated, dulled out, unable to read or work creatively as she needed to do — something that she lived to do. Happily, she worked with her doctor to titrate down and find a level that supported her in life.

There is much else to recommend for Touched With Fire. As a presenter of films I’m always cautious of a story that is too much message and not entertaining enough to engage a broad audience. This does a great job, with lots of great production values, sharp writing, colourful and creative scenarios (hey, it was made by a guy with bipolar with Spike Lee as mentor/executive producer) and two terrific actors in the lead roles.

It is the kind of film that can really open up discussion between peers on the bipolar journey and with family members. Dalio treats family members with compassion and even the professionals fairly, which is unusual in these kinds of stories. No Nurse Ratchets or hysterical or overly controlling parents. Touched With Fire presents a balanced, multi-layered view of what at least one or two kinds of bipolar experience can be.

I’ll be screening it and followed by a lively discussion at Movie Monday Sept 26 at 6:30 (more info here).

Warnings: Coarse language and scenes of suicide attempts that may be triggering. Here is a link to the trailer.