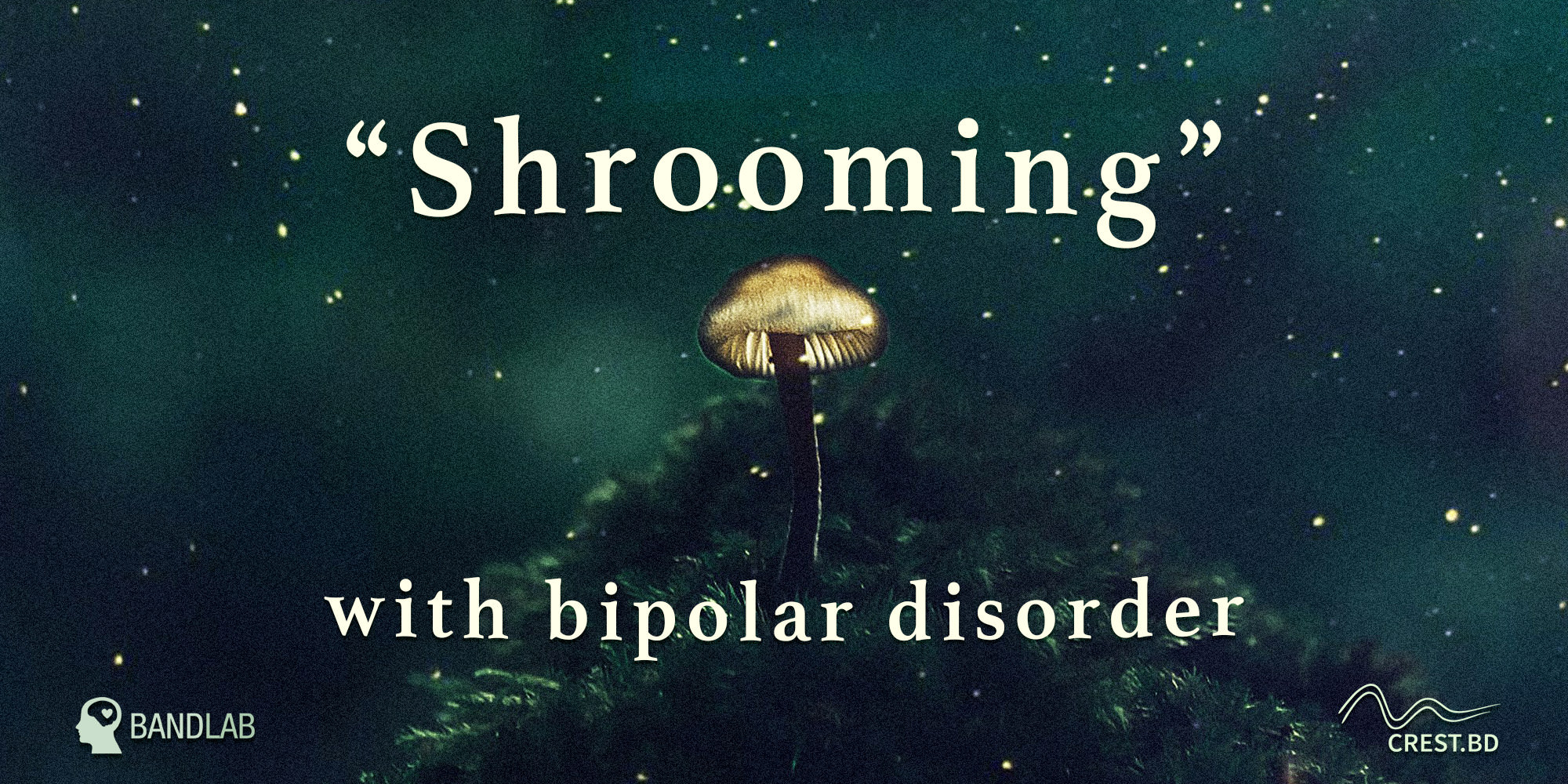 Enthusiasm and emerging evidence for the potential therapeutic uses of psychedelic compounds has led researchers from University of California, San Francisco (UCSF) to begin plans to study psilocybin (the primary psychoactive compound in “magic mushrooms”) for the treatment of depression in adults with bipolar disorder. The UCSF lab is teaming up with CREST.BD on an exciting new project as the initial step towards a clinical trial being planned at UCSF. The goal of the study? To assess the safety, impact, and cultural practices of “magic mushroom” use among adults with bipolar disorder.

The goal of the study? To assess the safety, impact, and cultural practices of “magic mushroom” use among adults with bipolar disorder.

The UCSF team consists of Dr. Josh Woolley, Associate Professor of Psychiatry and Dr. Mollie Pleet, a clinical psychologist and research fellow (full bios below). The researchers work within Dr. Woolley’s Bonding and Attunement in Neuropsychiatric Disorders (BAND) Lab, a research center exploring pharmacological interventions to enhance social connections among adults with mental illness. In recent years, BAND Lab has expanded its focus from treating people with schizophrenia and related disorders to studying an emerging topic area within the field of psychiatry: psychedelic therapy. The lab is conducting the first clinical trials of psilocybin for difficult-to-treat psychiatric conditions, including mood symptoms in adults with Parkinson’s disease and emotional distress in adults with chronic pain. We will soon be conducting the world’s first clinical trial of psilocybin to treat depressive symptoms in people with bipolar disorder type II. In preparation for this clinical trial, set to commence in 2021, the BAND Lab sparked collaboration with CREST.BD team members based at UBC to conduct an initial mixed-methods study to explore the risks, intentions, and general outcomes for adults with bipolar disorder who have used “magic mushrooms.” 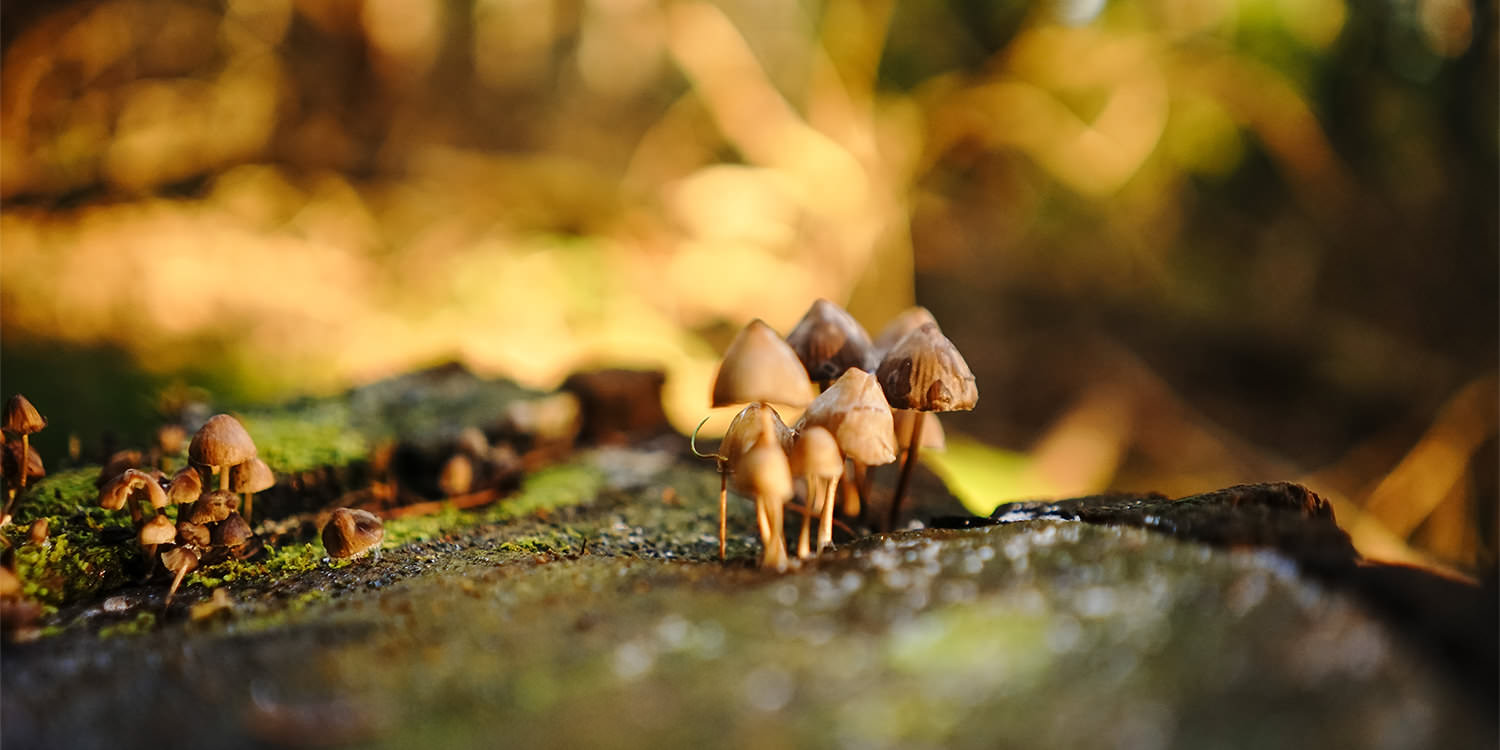 Motivation for this mixed-methods study stems from concern that the use of psilocybin among people with bipolar disorder could be associated with adverse clinical or mood symptoms. Indeed, people with bipolar disorder have been excluded from all previous clinical trials of psilocybin therapy due to fears of inducing mania or increasing suicidality. To tap the wisdom and experiences of community psychedelics users, we are conducting an online survey to learn more about how and why people with bipolar disorder use “magic mushrooms.” We want to know about the effects of full psychedelic mushroom “trips” on respondents’ health, safety, mood symptoms and wellbeing. A subset of survey respondents will be invited to engage in a qualitative interview to help us take a deeper dive into their experiences.

Together, these findings suggest that psilocybin therapy could have benefits for depressive symptoms in people with bipolar disorder as well.

Therapy using psilocybin typically includes a brief course of psychotherapy paired with one or two administrations of psilocybin. This novel treatment paradigm is receiving a lot of attention in the scientific and medical literature. Research into the effects of psilocybin in people experiencing treatment-resistant depression suggest that the compound’s short-acting psychedelic effects may promote long-lasting benefits in mood and anxiety symptoms with relatively benign physiological consequences1. After one or two administrations, psilocybin therapy has been observed to reduce anxiety (in a study conducted with cancer patients)2 and depression symptoms1 as well as substance use problems3, often for several months post-treatment2. Psilocybin appears to have antidepressant effects in animals4 and has been shown to induce long-lasting improvements in optimism and wellbeing5 in general population users. Together, these findings suggest that psilocybin therapy could have benefits for depressive symptoms in people with bipolar disorder as well. If this project piques your interest, sign up for the CREST Currents newsletter for updates, or bookmark the lab website. we’re hoping to launch the survey phase of our new BAND Lab-CREST.BD collaborative project in the coming weeks!

Sign up for our CREST Currents newsletter to receive future updates on our research into bipolar disorder and magic mushrooms. You can also learn more about Dr. Woolley’s lab at UCSF’s BAND Lab.

I am a clinical psychologist and research fellow in UCSF’s BAND Lab. After earning my psychology doctorate in 2018, I completed a clinical fellowship at the San Francisco VA Medical Center where I specialized in treating Veterans with post-traumatic stress disorder (PTSD) and substance use disorders. With a deepened appreciation for the challenges of recovery and a newfound curiosity about the role of consciousness in health, I next accepted a research position where I focus exclusively on exploring the therapeutic effects of psilocybin. I am working to contribute empirical evidence for the effects of consciousness-expanding drugs on the health and wellbeing of psychiatric populations.

I am a psychiatrist and neuroscientist and the Director of the BAND lab. We in the BAND lab believe that strong interpersonal relationships are the bedrock of mental health. Therefore, our mission is to develop novel pharmacological and cognitive interventions that help patients with mental illness connect meaningfully to other people and the world. Toward this goal, I have led my team in researching pharmacological treatments that affect social processes. We have conducted studies pairing administration of oxytocin, 3,4-methylenedioxy-methamphetamine (MDMA), and psilocybin with various psychotherapy interventions. Given the difficult-to-treat depressive symptoms commonly found in bipolar disorder and the promising data suggesting psilocybin assisted psychotherapy may be an effective treatment for unipolar depression, I am developing the first clinical trial to determine if psilocybin therapy can safely and effectively treat Bipolar depression. The mixed-methods study described above is the first step towards this goal. 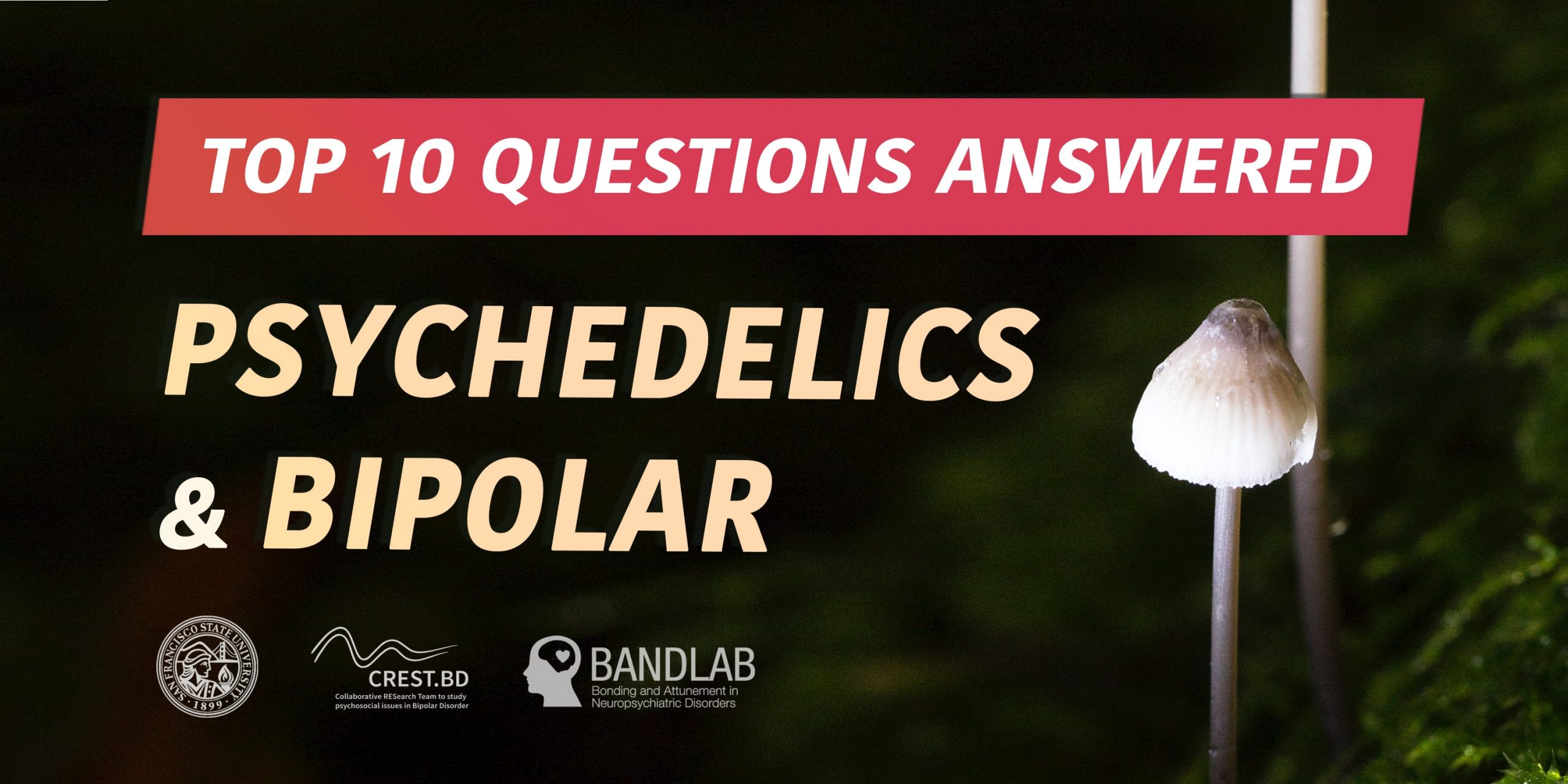 Ask an Expert: Psilocybin, Psychedelics, & Bipolar Disorder
Dr. Josh Wooley answers the top 10 most popular questions on the use of psychedelics, psilocybin, and bipolar disorder 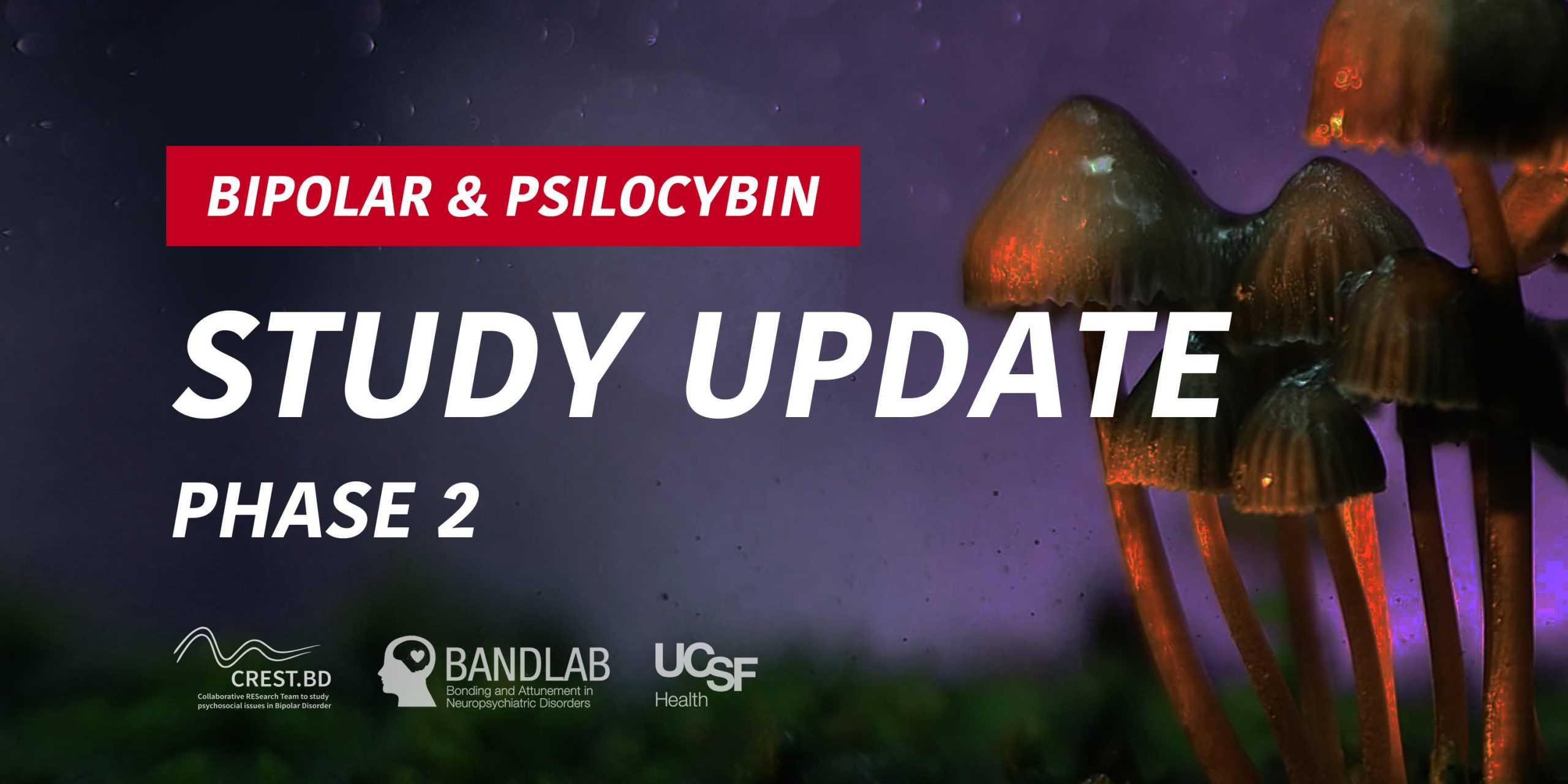 Study Update: Phase 2 of the Bipolar Psilocybin Project
We have officially closed the survey and are moving forward to the next phase of the study. 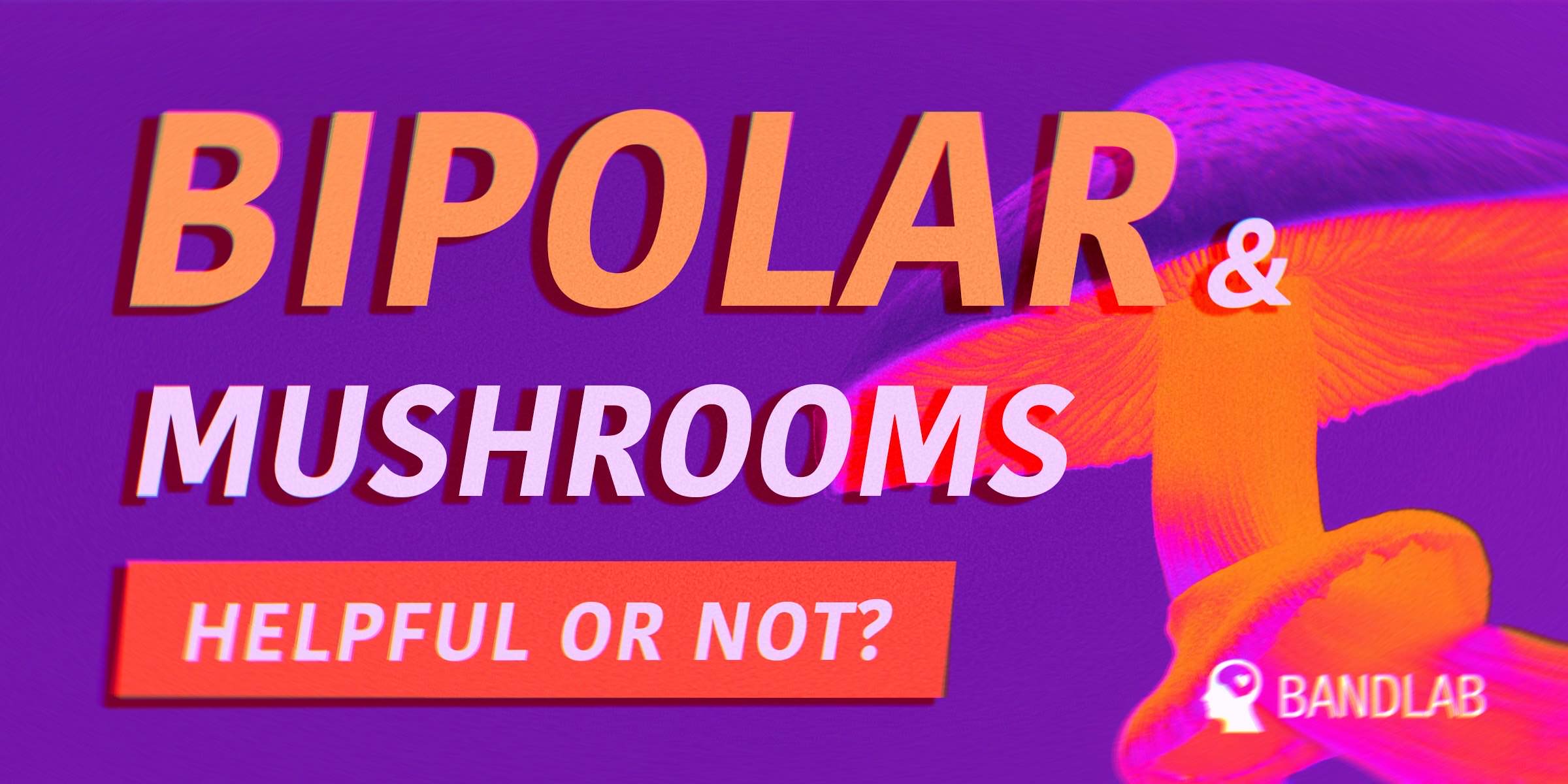 Survey Update: Risks and benefits of “magic mushrooms” in bipolar disorder
An early release of the very first study results is available in this short blog post.

107 Comments on ““Shrooming” with Bipolar Disorder: A Psilocybin Survey Study”