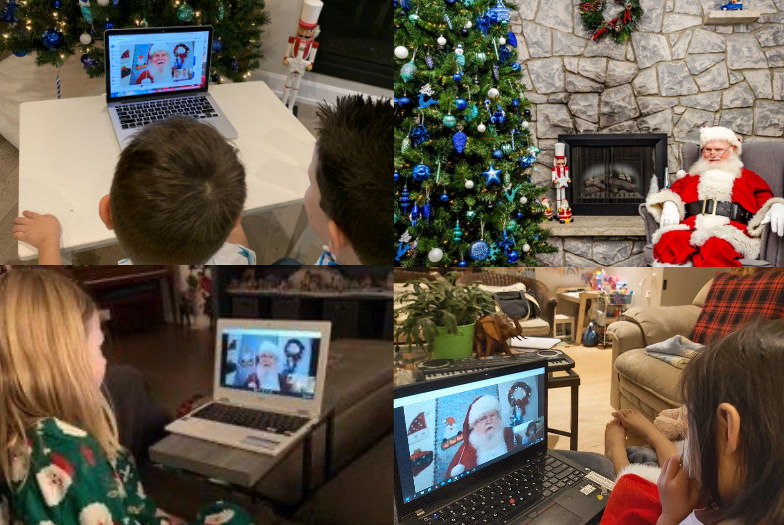 For those who celebrate Christmas, or just enjoy Christmas-y things, we have a sweet Christmas-themed blog post from our top blog contributor and resident Santa, Raymond Tremblay. Read it to learn how Santa’s gone virtual this year!

Even when you are a person living well with a bipolar disorder, I consider myself to be blessed in having been given the golden opportunity of playing Santa for the past eighteen years with different families, corporations and community organizations.

ʼTis the season to be jolly indeed. However, this current vicious even at times deadly world-wide Covid-19 pandemic imposed some major restrictions on Santa’s annual appearances at the Cadillac Fairview Rideau Centre, a big popular shopping centre located in downtown Ottawa, Canada,.

So Santa had to scratch his head and rub his long white beard many times before thinking of a novel idea of reaching out to all the little children of the world before making his one and only special visit on Christmas Eve.

Mrs. Claus came up with a fantastic suggestion. She told me that she’d be willing to schedule virtual Santa sessions with as many children as possible prior to Christmas. Being an obedient husband, Santa agreed 100% with her. From that point on any child who made a request for such a session, Santa tried to accommodate him or her as much as possible in his remarkably busy agenda.

Day after day, calls via Zoom, FaceTime and Facebook Messenger rang in Santa’s office. What a pleasure it was for Santa to be able to have a private face to face live chat with all these children. To no one’s surprise, the children were so excited and so was Santa. And most amazingly of all, the children’s requests for gifts this year were amazingly reasonable.

Our virtual chats lasted between 15 and 30 minutes each session. Santa asked them wanted they would like to receive as gifts and what kind of gifts they thought their parents would like to receive. Most children still believed that Santa would be coming down the chimney again this year to deliver their gifts, but they were all surprised to hear that Mrs. Claus had already warned me not to this year because she didn’t want Santa to dirty his brand-new Santa suit since she wouldn’t have time to wash it upon my return to the North Pole after my world-wide trip. Much to Santa’s surprise and delight, Mrs. Claus had already planned a three-week surprise vacation to Hawaii for herself and Santa immediately after Christmas. So Santa obeyed her commands like any good little boy would. 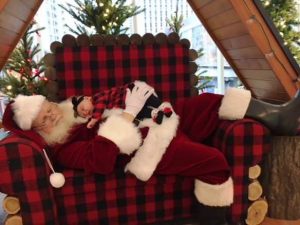 Santa takes a nap with a little friend, back before the pandemic.

If Santa couldn’t come in the children’s homes the usual way, most of the children were all surprised to hear that I’d be coming in by the front door with a special magical key that he received from a good friend of mine living in Poland.

Santa thanked all the children since they had already thought of leaving by their Christmas tree no more than two chocolate chip cookies and one small glass of milk for me, carrots for the reindeer and one sugar cube for Rudolph.

Most of the children were unsure why Rudolph had such a shiny red nose while Dasher, Dancer, Prancer, Vixen, Comet, Cupid, Donner, and Blitzen just had a regular reindeer nose. Some already knew that Rudolph’s special nose could help Santa see through thick dark clouds and heavy snowstorms. However, all the children were surprised to hear that a mini-GPS was also located in his nose so that when Santa asked him to head for any place in the world, Rudolph would have to shake his head and automatically his GPS would tell him exactly where to go to.

Oh my goodness, these virtual visits with children from all over the world were so much fun. To see the happiness, joy and excitement in all the children’s faces, and the sparkle in their eyes when they were speaking directly with Santa in the North Pole, simply filled Santa’s heart with pure bliss.